The Philadelphia Eagles finally got the monkey off their back that was the Washington Redskins in a 30-17 win in  Washington last Monday morning. 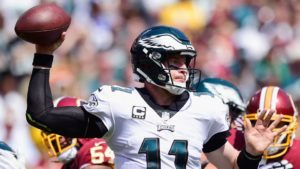 The final scoreline could indicate a comfortable victory, but in typical Philadelphia sports fashion this was anything but that. Cornerback Jalen Mills picked off Washington quarterback Kirk Cousins in the fourth quarter withe the Eagles leading 19-17 before a questionable call on a fumble from Cousins resulted in a Fletcher Cox touchdown with 1.29 remaining.

It was the Eagles first win in three years over their divisional rival.

Play of the day

Carson Wentz on a third and long in the first quarter evaded multiple pass rushers before slinging the ball down the field into the waiting arms of Nelson Agholor who competed the 58 yard score.

It was a thing of beauty for both QB and receiver, who have had to endure an off-season of question marks on their potential.

What was not so good

A trip to Kansas City to face one of two head coaches to take the Birds to the Super Bowl, Andy Reid. The AFC West champion Chiefs are coming off a huge win over New England in Boston and have talent all over the field. A win in this one on the road will stamp the Eagles as a legitimate contender.